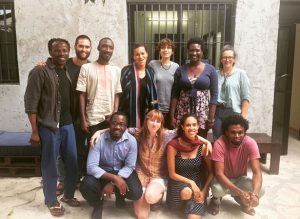 RAW Académie is a tuition-free residential experiential study programme for artistic and curatorial thought and practice inquiry of eight weeks in Dakar. It is dedicated to a lively reflection on artistic research, curatorial practice and critical writing. The academy is held during two distinct sessions per year: October–December and April–June. Each session is directed by a Lead Faculty who has displayed an off-the-beaten-track practice in regard to artistic, curatorial and critical imagination. Session 2 is led by Chimurenga, the Cape Town based pan-African platform for writing, art and politics. It takes place fromApril 3 to May 26, 2017.

Session 2: Angazi, but I’m sure by Chimurenga
“Angazi, but I’m sure” is a common South African phrase. In English it means: “I don’t know, but I am sure.” It is a deliberately self-contradictory phrase that is usually spoken in prelude to a reply—often, when one is asked for directions or facts. “Angazi, but I’m sure if you turn left you will get there”. The respondent is uncertain of what they “know.” Or, perhaps, they are certain, but they do not know how to speak it. Or, they know, but do not know what they know. Sharing knowledge in this way requires mutual trust—it is speculation, in every sense of the word.

“Angazi, but I’m sure” is a break between our linguistic selves and a world, between knowledge and our ability to speak or map it—the knowledge that is elevated as finished product. The phrase suggests that arriving is as much about displacement as about place. More urgently, it claims lived experience, improvisation and imagination as forms of knowledge themselves. How do we learn to know what we know? This requires not only a new set of questions, but its own set of tools; new practices and methodologies that allow us to engage the lines of flight, of fragility, the precariousness, as well as joy and creativity and beauty that define the contemporary African moment.

Chimurenga has long considered the shebeen (illegal drinking tavern) as a college of music. Can we draw on the improvisational, pedagogical method of black musics, where learning is collapsed into performing, and teachers and learners share the stage? How do we embrace knowledge not as information but as a methodology—a way of learning that expresses the conditions of our lives, our very existence. Can we take seriously food as knowledge, music as research and pan-Africanism as a practice? What if maps were made by Africans for their own use, to understand and make visible their own realities and imaginaries? What could the curriculum be—if it was designed by the people who dropped out of school so that they could breathe?

About Chimurenga
Drawing together myriad voices from across Africa and the diaspora, Chimurenga takes many forms operating as platform for free ideas and political reflection about Africa by Africans—its motto draws from Felasophy: who no know go know. Outputs include a journal of culture, art and politics of the same name, a quarterly broadsheet called The Chronic, The Chimurenga Library—an online resource of collected independent pan-African periodicals and personal books, and the Pan African Space Station (PASS)—an online music radio station and pop-up studio. The aim of these projects is not only to produce new knowledge, but to express the intensities of our world and to capture those forces, to act.

A maximum of ten fellows are selected for each session. The application process for Session 2 opens on December 19, 2016 and closes on January 31, 2017. Only the first 75 applications will be considered for review.

Selected applicants will be notified and invited for online interview. Apply here.