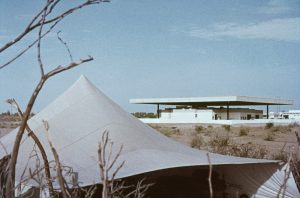 Open call for a collaborative and multidisciplinary research project on architecture’s complex developments in sub-Saharan African countries after independence.

What would a history of architecture look like with Africa positioned at the centre? The Canadian Centre for Architecture (CCA) is launching a collaborative and multidisciplinary research project on architecture’s complex developments in sub-Saharan African countries after independence. The project is open to researchers, journalists, practitioners, and cultural producers from architecture history and other relevant disciplines.

The architecture practice and discipline, along with academic institutions, archives, libraries, and museums, have been integral to what Valentin-Yves Mudimbe calls “the invention of Africa” by the West. This project therefore asks, first, how to understand architecture’s historical role in decolonization, neocolonialism, globalization, and their manifestations across the continent, at local and regional scales; and, second, how this understanding can challenge established methods and disciplinary conventions of architectural and urban studies. “Centring Africa: Postcolonial Perspectives on Architecture” seeks to contextualize such seemingly paradoxical relations as those among building and unbuilding, formal and informal, appropriated and expropriated, and modern and traditional. The project aims to question, and eventually shift, perspectives shaped by North/South knowledge divides.

The CCA solicits proposals for research projects that will address crucial but unresolved historiographical questions of architecture in postcolonial Africa, arising from the transnational, multidirectional complexities of the new world order created around the idea of the Global South in the second half of the twentieth century.

With funding from The Andrew W. Mellon Foundation, the CCA will direct this eighteen-month project to analyze and historicize the ways in which architecture manifests transformations in post-independence African countries, potentially tracing these processes back to colonial periods. The grants will support original, case-based research on concrete projects, actors, architectural typologies, key geographies, or urban developments that explore the history of architecture’s agency in sub-Saharan Africa.

Applicants may propose projects that complicate Africanist, global, and postcolonial approaches to architectural history. Projects addressing cases that cannot be contained within a post-independence periodization and the sub-Saharan context will still be considered. Collective projects are also welcome, but responsibilities and roles must be clearly defined. Proposals should also address the multidisciplinary methodology inherent to the theme of architecture’s role in decolonization, articulating how their project addresses broader questions in disciplines beyond architecture, urbanism, and planning such as anthropology, cultural studies, history, geography, political science, and political economy.

This research initiative is catalyzed in part by the recent arrival at the CCA of three important archival collections related to architecture, urbanism, and territoriality in Africa: those of Dutch planner Coen Beeker, German architect Georg Lippsmeier, and Kiran Mukerji, an employee of Lippsmeier. Together, these archives form a unique research library of nearly three thousand titles, which will serve either as a main source or an investigative starting point for the studies developed, individually or collectively, in the framework of CCA’s fourth Mellon Multidisciplinary Research Project.

About the CCA
As an international research centre and museum that operates from the fundamental premise that architecture is a public concern, the CCA investigates and explores the grey zones of contemporary culture, contemporary society, and contemporary architecture to critically expose its contradictions and define a new agenda for architectural practice and scholarship. Led today by Director Mirko Zardini with Chief Curator Giovanna Borasi, the CCA houses one of the most important architectural collections in the world. It produces research, exhibitions, publications, public programs, and digital initiatives as a means to explore the role of architecture in larger questions affecting society today.

The CCA was founded by Phyllis Lambert in 1979 as a new type of cultural institution, with the specific aim of increasing public awareness of the role of architecture in contemporary society and promoting research in the field.