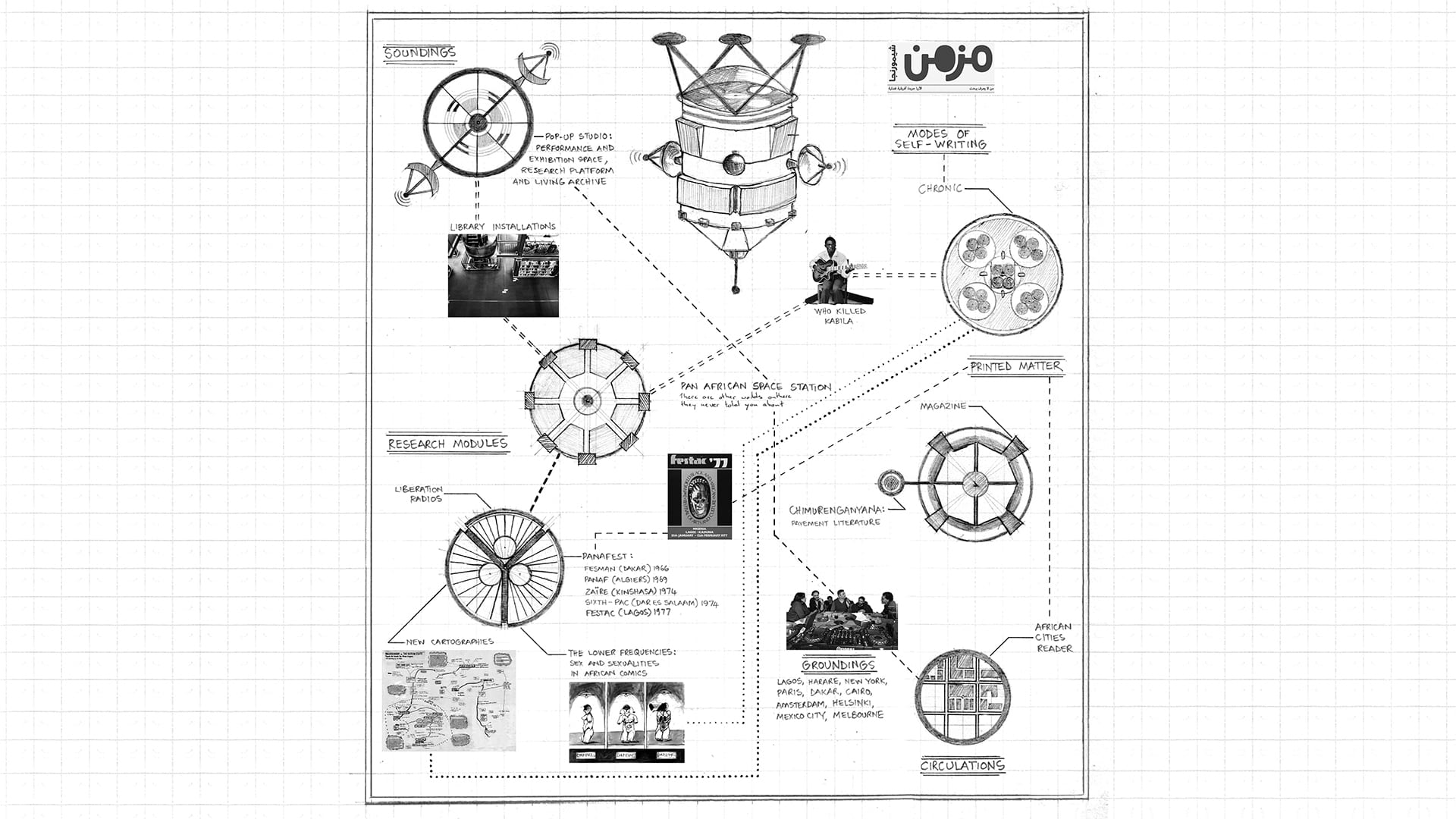 Founded by Chimurenga in collaboration with musician and composer Neo Muyanga in 2008, the Pan African Space Station (PASS) is a periodic, pop-up live radio studio; a performance and exhibition space; a research platform and living archive, as well as an ongoing, internet based radio station.

Working in transitory spaces and at the intersections between different fields, organising sound, music and words into new forms of knowledge, PASS is a machine for travelling at the speed of thought – it borrows its slogan “There are other worlds out there they never told you about” from the philosopher, composer and bandleader Sun Ra.

PASS seeks to challenge the concepts this present has of Africa and to excite new transitory and transient communities with each journey, bringing focus to collective experience and targeting an investigation into how we locate ourselves and how we mediate our human and historic commonality.

The program Radio MAC is inspired by the Anti Colonial Movement created in 1957 in Lisbon and is curated by Sónia Vaz Borges and Mónica de Miranda in partnership with Chimurenga. It is a Pan African radio station, developed in several episodes, that presents a reflection on the liberation movement through stories of migration.

Radio MAC aims to build awareness of the past and present struggles and redefine the Anti Colonial movement in the present through memory, resistance, and possible utopias. The dialogues recurring in the program mingle music, discourses, poetry, and performance to guide listeners through a constructed world where different experiences and times root in a common ground.

This project was produced with national funding from the FCT-Fundação para a Ciência e a Tecnologia, I.P. under the project UIDB/00509/2020.

Sónia Vaz Borges is an interdisciplinary militant historian and social-political organizer. She too describes herself, as an enthusiastic traveler, an avid language learner, and an attentive listener. Sónia received her Ph.D. in History of Education from the Humboldt University of Berlin, and is the author of the book Militant Education, Liberation Struggle; Consciousness: The PAIGC education in Guinea Bissau 1963-1978, (Peter Lang, 2019), and Na Pó di Spéra. Percursos nnos Bairros de Santa Filomena, Estrada Militar e Encosta Nascente (Calouste Gulbekian, 2014). Along with filmmaker Filipa César, Sónia co-authored the short film “Navigating the Pilot School.” (2016) and “Skola di Tarafe” ( work in progress, 2021). She is currently a researcher at Humboldt University Berlin in the History of Education Department and is working on the project “Education for all” with a special focus on Mozambique and the FRELIMO liberation movement, and the Sandinistas revolution in Nicaragua. Parallel to this Sónia is developing a book proposal, based on a personal research project focused on her concept of the “walking archives”.

Mónica de Miranda is a Portuguese artist of Angolan origin who lives and works between Lisbon and Luanda. Artist and researcher, her work is based on themes of urban archaeology and personal geography. She works in an interdisciplinary way with drawing, installation, photography, film, video and sound, in its expanded forms and within the boundaries between fiction and documentary. The artist graduated in Visual Arts and Sculpture from Camberwell College of Arts (London) and rewarded a PhD in Artistic Studies from Middlesex University (London). In 2019, she was nominated for the New artist prize at MAAT and nominated in 2016 for the New Photo Bank Prize, exhibiting as one of the finalists at the Berardo Collection Museum. Some of her exhibitions include; Architecture and Manufacturing, at MAAT in Lisbon (2019); Panorama, Banco Económico (Luanda, 2019); Doublethink: Doublevision, Pera Museum (Istanbul, 2017); Daqui Pra Frente, Caixa Cultural (Rio de Janeiro and Brasília, 2017-2018); Vila Franca de Xira Biennial Photography(2017); Dakar Biennialin Senegal (2016); Bienal de Casablanca(2016), Addis Foto Fest(2016); Encontros Fotográficos de Bamako (2015); MNAC (2015); 14ª Bienal de Arquitectura de Veneza (2014); Bienal São Tomé e Principe (2013); Estado Do Mundo, Fundação Calouste Gulbenkian (2008). In addition, she co-founded the Hangar project (Artist Residency Centre, Lisbon, 2014).Her work is represented in several public and private collections, including: Calouste Gulbenkian, MNAC, MAAT, FAS and the Municipal Archive of Lisbon.

Chimurenga is a project-based mutable object, publication, workspace, and pan African platform for editorial activities. Founded by Ntone Edjabe in Cape Town in 2002, it is a space for ideas, reflection and action. Outputs include a broadsheet called The Chronic; The Chimurenga Library – an ongoing intervention into knowledge production that explores the writing of history in the absence of documentary archives, thus seeks to re-imagine the library; the African Cities Reader – a biennial publication of urban life, Africa-style; and the Pan African Space Station (PASS) – an online radio station and pop-up studio.

Author of the poetry book “Ingenuity Innocence Ignorance” (BOCA. 2019) Raquel Lima is a Portuguese poet, art educator, and researcher in Post-Colonial Studies, currently doing her Ph.D. at the University of Coimbra. This conversation will linger between Lima’s poems and the narration of utopias.

Chalo Correia, “The war finished and people lead us”

Chalo is an Angolan singer and composer who has lived in Portugal for 27 years. This conversation will focus on the topic of the state of affairs after the various conflicts that took place in Angola. Through his works, Chalo will revisit some of the conflicts that are strongly constituting the Angolan collective memory. The fundamental question at stake is “where are we going now that the war is over?

Telma Tvon, “Rebels with a Cause”

Author of the book “Um preto muito portugês” (Editora Chiado, 2017).
The writer and rapper Telma Tvon was born in Luanda, Angola, in 1980. She migrated to Lisbon in 1993, where she attended secondary school and embraced the Hip Hop community and a path that lead us to the “rebels with a cause”, a conversation that connects music, places, memories with a writing path of “recognition, attitude, and the verbiage”.

Galissa, “The future of the land”

Galissa is a musician from Guiné Bissau who has been raised in a family of traditional musicians. In “ The future of the land”, he reflects on Guiné Bissau’s history and its present, specifically believing in the fact that changes can occur from any fallacy. Gallisa will lead listeners through his childhood memories of colonisation and war and elaborate on his encounter with Amílcar Cabral’s message on the fight for freedom.

Marinho de Pina, “I migrate between languages and tongues”

Geraldo Pina, known as Marinho de Pina, is a performing artist and writer who is currently a fellow of the Ph.D. program at the University Institute of Lisbon (ISCTE-IUL). In this conversation, Pina will share his migration path and his desires of being considered as part of the people, specifically addressing a letter to “Dear Europe”.

Lucky, “Xee boy, do not talk about politics”

Lucky is an Angolan DJ living in Lisbon and born in Kinshasa. After the war exodus from Angola to Congo, he returned to Luanda with his family. In the interview he will highlight the importance of radios and explain how Angolan people in Congo can listen to their home land news. Lucky will share his life experience and the changes throughout time, from working as a builder to becoming a renowned DJ.

Carla Fernandes, “Being our own authors”

Founder of Afrolis – Cultural Association, an organization dedicated to the promotion of cultural expression and the construction of new identity narratives of People of African descent, Carla Fernandes is a journalist, translator, and cultural producer. Together with Sónia Vaz Borges, she will engage in a personal and professional conversation about memories, ambitions, and the creation of African spaces in the Portuguese capital.

Gama is an Angolan composer whose process begins with the creation of an entirely new instrument, one whose design is steeped in symbolic meaning. “War of the reptile men” is a composition that he conceived while living in Angola during the war. He will explain how tuning into radio static expanded his understanding of the possibilities of both music and sound as a medium. In addition, he will focus on the Dikenga cosmogram, the Central African graphic writing system, and the project “tecktonik: Tombwa – geografias em colisão”, based on a manuscript found in South Africa in the late 90s which reveals a research thesis by the Angolan anthropologist Agusto Zita N´Gonguenho.

BLANKSPACE: Home as a Parish