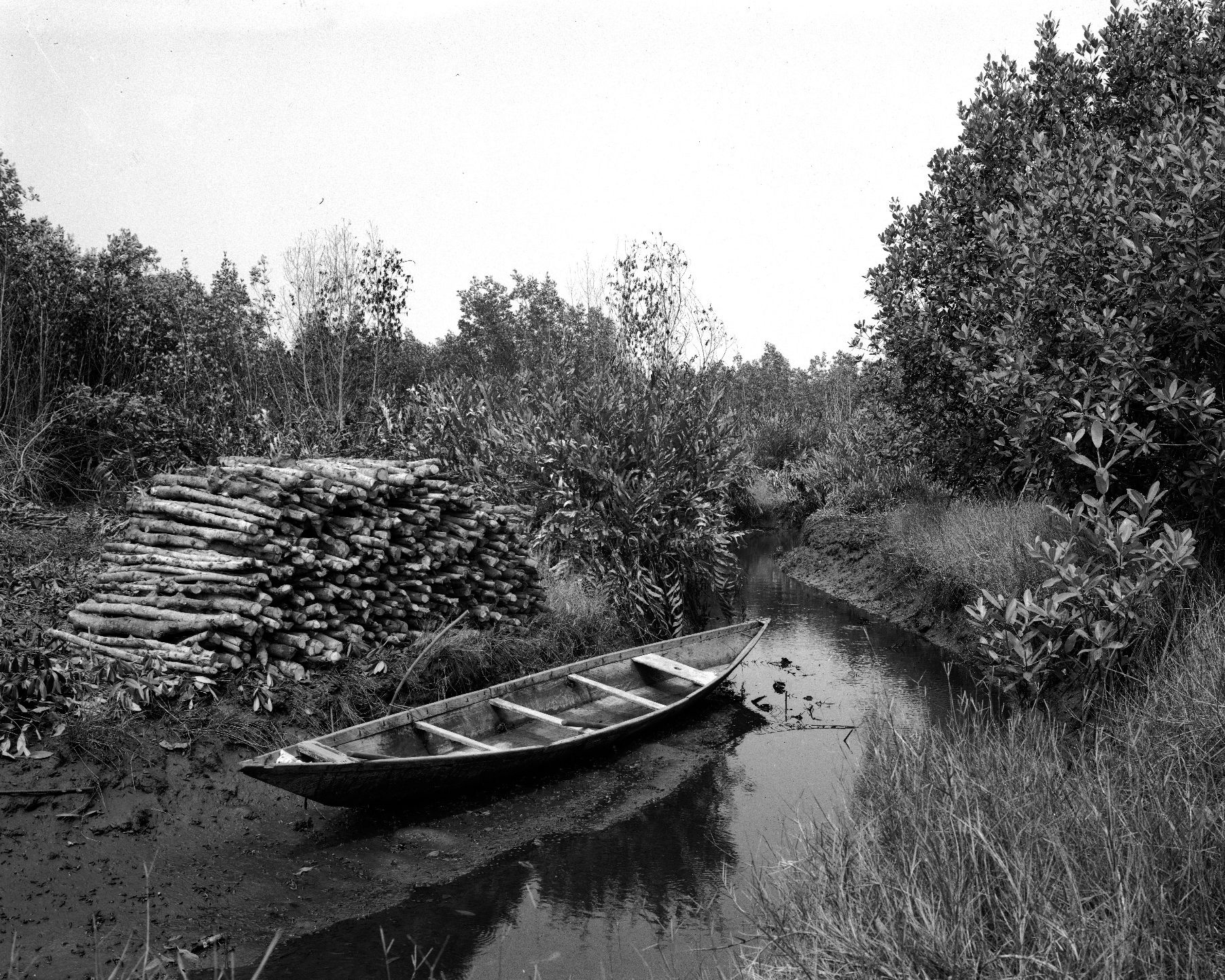 ©️Untitled #1, The Mangroove: This photograph, comes from my long term project, Paradox of Paradise (POP), through which I respond to a calling; listening to Earth tell her story by looking into our relationship with the landscape, learning how powers, culture, history, time, spirituality and the sacred etch memories into the environment. My travels so far have been in Ghana, Sao Tome and Mozambique.
– Nii Obodai, 22/09/2020

Cycle of talks regarding artists run spaces and artist led spaces which Hangar has a relationship with are connected to the residency in residence program at Hangar and to the Triangle Network. The partners are located in Ghana, Morocco, UK, Iran and China.

This talk focuses on Nuku Studio in Ghana run by the photographer Nii Obai. The talk is mediated by the artist Maíra Zenun.

Nuku Studio is a space, an institution, a community that is strongly connected to the place it finds itself in – Ghana. It provides an innovative and productive support system for sustainable artistic and professional photographic practice.

Nuku Studio creates and grows a self-sustained photography community and network. It provides the Ghanaian photography community with a safe space to meet, experiment, exchange, inspire and be inspired, and grow. Its protected space is open to all creatives and visual artists and invites especially women and the LGBTI community to be part.

Nuku Studio brings together emerging and established photographers, encouraging them to find their very own voice. It is a space for learning, teaching and mentorship.

Nuku Studio is convinced of the power of story-telling and the power of photography as a means to document and stimulate societal change. Nuku Studio showcases visual stories from Ghana, Africa and beyond that are meaningful and told responsibly.

Nuku Studio is about photography that defines the future – its photographers integrate their vision of the future into their work. Creating the future also means reclaiming and conserving our history. Creative cultural contributors are key contributors to this process.

Ghana-based, Nuku Studio builds on more than two decades of experience in photography practice locally and globally. Evolving from Nuku Café, Nuku Studio was established by photographer Nii Obodai in 2015. Since then, it has grown thanks to a dedicated team consisting of some of Ghana’s most innovative photographers.

This talk focuses on LE 18, Derb el Ferrane, a multidisciplinary art space for artists, curators, researchers, cultural agents and local communities in Marrakech founded by the artist Laila Hida. The talk is mediated by the curator Jeanne Mercier.

Operating since 2013, and located in the medina of Marrakech, the residency programme is a key component of LE 18 vision and objectives: it is imagined as a space-time in which both local and international artists can deepen their research and practice in dialogue with the context hosting them. Hence, we encourage particularly, though not exclusively, proposals open to engage with the programming of the space, with the context of Marrakech in particular and of Morocco in general. Every residency is tailored as much as possible to the artist/researcher needs and proposals, through a dialogical process and in relationship with the possibilities LE 18 has to offer, both in terms of length and support. Conscious of the relative difficulties in freeing time and finding resources to conduct research, LE 18 endorses a politics of reiteration of invitations and rooting relationships with the space and the context.

Mediated by Adama Sanneh this online talk with multi-media artist Heba Y. Amin analises her social engaged projects in the form of activism and her creation of the Black Athena Art Collective along with the artist Dawit L. Petros.

Heba Y. Amin engages with political themes and archival history, using mediums including film, photography, archival material, lecture performance and installation. Her artistic research addresses the convergence of politics, technology, and architecture, and takes a speculative, often satirical approach to challenge narratives of conquest and control. Amin looks for tactics of subversion and other techniques to flip dominan historical narratives through critical practices.

The fourth online is focused on Kooshk Residency in Teheran. The talk is a conversation between Maryam Bagheri, the Executive Manager of the residency, and Tooraj Khamenehzadeh, the former Manager and now artist and curator based in New York.

Established in 2014, Kooshk brings together artists, curators, researchers, writers and filmmakers to encourage inter-cultural dialogue and art creation. International exchange and artist mobility are at the core of the residency programme, which strives to contribute to the development of Iranian art and culture.

Kooshk believes in exchanging ideas, and it shapes a mutual plan to provide the facility for both Iranian and foreign artists. The selected artists get connected and start a dialogue during the duration of two residencies: a one-month residency in one of those countries and the second in the other. While working from a distance, the artists are provided with spaces to stay and studios to work.

Local institutes also collaborate with Kooshk by providing a space for open studios, artist talks, shows, and presentations in case of need. The aim of these partnerships is to develop the culture of residency in Iran and provide interaction between local institutes. Kooshk became partners with international programs in Iran such as TADAEX festival, Tehran Art Management too.

Kooshk main objectives are to develop the culture of art residency, help Iran’s contemporary arts and artists come out of isolation, and bring about an international encounter. Kooshk has always considered the diversity of the countries when it comes to inviting the artists and connecting to artist residencies.

Francis Nii Obodai Provençal (b.1963) is a Ghanaian photographer based in Accra, Ghana and Maputo, Mozambique. Throughout his career, Nii Obodai has documented the complexity of his world through photography, audio, and text. He is particularly passionate about photography as a medium for recording and celebrating the unseen and unexpected dynamics of everyday life on the African continent. His work explores our complex relationships with the environment and with one another. His deep interest in how the past is remembered and the photographers role in that process stems in part from aphantasia, a condition which prevents him from forming images in his mind. Photography has become the means by which Nii Obodai remembers the past and conjures the present.

In 1998 he co-established Nuku Café in Accra, a vibrant space for contemporary artists committed to a socially and politically conscious practice. It has evolved into Nuku Studio, which engages in collaborative academic research projects and organizes an annual programme of workshops aimed at developing photographic and visual communication skills. The studio also founded the eponymous Nuku Photo Festival, Ghana’s first photography festival.

Jeanne Mercier, co-founder of Afrique in visu, is an independent curator and critic. Through her research, she is interested in new forms of artistic practices around the image, photo, video, installation and works that convey counter-narratives, create new imaginations or myths emancipated from the dominant cultures and iconographies. She works and collaborates with various international institutions, art reviews and books. Recently, she was curator of Beliefs: Unraveling the Invisible at the Institut des Cultures d’Islam in Paris (2020), Mythologies of resistance at the Fotofestiwal in Lodz (2019), “Africa is no an island” at the MACAAL in Morocco and at the Zinsou Foundation (2018) or the Kerkennah Festival in Tunisia (2017).

Laila Hida (1983), lives and works in Marrakech (Morocco).
In her conceptual approach, Laila Hida explores the boundaries of photographic practice, non-negotiated spaces of social practices, and the idea of transformation as a constant of time. Her current project, ‘Everything is temporary’ (2019) relies on her personal archives (textual and photographic) to sketch an archaeology of intimacy by observing the psychological variations (resilience, self-analysis) on the maturation of a work of art across time and space.

In 2013, Laila Hida founded LE 18, Derb el Ferrane, a multidisciplinary art space for artists, curators, researchers, cultural agents and local communities. Extending its artistic work in the entrepreneurial form, the program / project of 18 is conceived as a space for learning, experimentation and sharing around issues such as the role of the arts in the evolution of socio-cultural ecosystems through a diversity of programme formats and perspectives.

Maíra Zenun – In 2019, became PhD in Sociology from UFG, with the thesis “The City and the [Black] Cinema: the FESPACO’s case”. Master in Sociology from UnB and Bachelor in Social Sciences from UFRJ. Participated in TRANSE/UnB and since 2014 collaborates with FICINE. In Lisbon, is co-founder of NêGa FiLMeS, and as part of this double-collective, coordinates and does the curatorship of the Mostra Internacional de Cinema na Cova.”

Adama Sanneh, Co-Founder and CEO of the Moleskine Foundation, graduated in Linguistic and Cultural Mediation from the University of Milan, he worked for several years in East Africa on rural development and humanitarian emergency programs. He obtained a Master in Public Management (MPM) from the Bocconi School of Management and a Master in Business Administration (MBA) from the University of Geneva.

After graduating he worked as a management and strategy consultant for various public and not-for-profit organizations among which the United Nations, in education, social entrepreneurship and innovation.

Heba Y. Amin, (b. 1980, Cairo) is a multi-media artist and Professor of Art at the Stuttgart State Academy for Art and Design. She is the co-founder of the Black Athena Collective, curator of visual art for the MIZNA journal, and currently sits on the editorial board of the Journal of Digital War. Heba Y. Amin was awarded the 2020 Sussmann Artist Award for artists committed to the ideals of democracy and antifascism, and was selected as a Field of Vision Fellow, NYC (2019). Amin’s work has been shown in numerous exhibitions including The Mosaic Rooms, London (2021), Eye Film Museum, Amsterdam (2020), Quai Branly Museum, Paris (2020), MAXXI Museum, Rome (2018), Liverpool Biennial (2021), 10th Berlin Biennale (2018), 15th Istanbul Biennale (2017), and 12th Dak’Art Biennale (2016), to name a few. Her latest publication, Heba Y. Amin: The General’s Stork (ed. Anthony Downey) was recently published by Sternberg Press (2020) and her works and interventions have been covered by The New York Times, The Guardian, the Intercept, and BBC among others.
https://www.hebaamin.com

Tooraj Khamenehzadeh is an Iranian artist based in New York. His works have been presented in various international festivals, exhibitions, and biennials such as Iran Photo Biennial (Iran), Monnaie de Paris (France), Polyforme Festival (France), Chongqing Photo and Video Biennale (China), International Art Festival (Nepal), Now&After Video Art Festival (Russia). His works have also been published in different books and magazines like African Textile Today (UK), PIX Magazine (India), Connaissance des Arts Magazine (France), and Canvas Magazine (UAE). He received his BS in Computer Engineering from Qazvin Azad University in Iran and his MFA in Photo, Video, and Related Media from the School of Visual Arts in New York. In addition to his activities as an artist, Khamenehzadeh has been on the curatorial and management teams of many arts and cultural projects. He is the co-founder and a board member of Rybon Art Center, a former board member of Res Artis in Amsterdam, and the former curator and program manager of Kooshk Residency in Tehran.

Maryam Bagheri holds a BA in English Literature. She has diverse experience in documentary filmmaking, researching, film archiving, journalism and documentary film distribution. Currently, she is an executive manager of Kooshk residency in Tehran. She has worked as MENASA cluster coordinator for Res Artis, the largest existing network of artist residency programs for three years, from 2017 to 2020.

BOOK LAUNCH | ATLANTICA: CONTEMPORARY ART FROM MOZAMBIQUE AND ITS DIASPORA